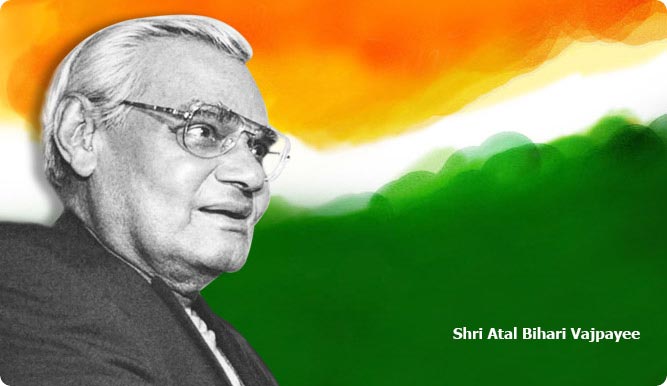 Born on December 25, 1924, in Gwalior, Madhya Pradesh to Shri Krishna Bihari Vajpayee and Smt. Krishna Devi, Shri Vajpayee brings with him a long parliamentary experience spanning over four decades. He has been a Member of Parliament since 1957. He was elected to the 5th, 6th and 7th Lok Sabha and again to the 10th, 11th 12th and 13th Lok Sabha and to Rajya Sabha in 1962 and 1986. In 2004, he was to Parliament from Lucknow in Uttar Pradesh for the fifth time consecutively. He is the only parliamentarian elected from four different States at different times – UP, Gujarat, MP and Delhi. His legacy as Prime Minister is a rich one that is remembered and cherished even a decade after his term ended. It included the Pokhran nuclear tests, astute and wise economic policies that laid the foundations of the longest period of sustained growth in independent Indian history, massive infrastructure projects such as those related to development of national highways and the Golden Quadrilateral. Few Indian Prime Ministers have left such a dramatic impact on society.

Shri Vajpayee has participated in various social and cultural activities. He has been a Member of the National Integration Council since 1961. Some of his other associations include –
(i) President, All India Station Masters and Assistant Station Masters Association (1965-70);
(ii) Pandit Deendayal Upadhyay Smarak Samiti (1968-84);
(iii) Deen Dayal Dham, Farah, Mathura, U.P; and
(iv) Janmabhomi Smarak Samiti, 1969 onwards.

Widely respected within the country and abroad as a statesman of the genre of Pt. Jawaharlal Nehru, Shri Vajpayee’s 1998-99 stint as Prime Minister has been characterised as ‘one year of courage of conviction’. It was during this period that India entered a select group of nations following a series of successful nuclear tests at Pokhran in May 1998. The bus journey to Pakistan in February 1999 was widely acclaimed for starting a new era of negotiations to resolve the outstanding problems of the sub-continent. India’s honesty made an impact on the world community. Later, when this gesture of friendship turned out to be a betrayal of faith in Kargil, Shri Vajpayee was also hailed for his successful handling of the situation in repulsing back the intruders from the Indian soil.

It was during Shri Vajpayee’s 1998-99 tenure that despite a global recession, India achieved 5.8 per cent GDP growth, which was higher than the previous year. Higher agricultural production and increase in foreign exchange reserves during this period were indicative of a forward-looking economy responding to the needs of the people. “We must grow faster. We simply have no other alternative” has been Shri Vajpayee’s slogan focusing particularly on economic empowerment of the rural poor. The bold decisions taken by his Government for strengthening rural economy, building a strong infrastructure and revitalising human development programmes, fully demonstrated his Government’s commitment to a strong and self-reliant nation to meet the challenges of the next millennium to make India an economic power in the 21st century. Speaking from the ramparts of the Red Fort on the 52nd Independence Day, he had said, “I have a vision of India: an India free of hunger and fear, an India free of illiteracy and want.”

Shri Vajpayee participated in the freedom struggle and went to jail in 1942. He was detained during Emergency in 1975-77.

Shri Vajpayee was conferred Padma Vibhushan in 1992 in recognition of his services to the nation. He was also conferred the Lokmanya Tilak Puruskar and the Bharat Ratna Pt. Govind Ballabh Pant Award for the Best Parliamentarian, both in 1994. Earlier, the Kanpur University honoured him with an Honorary Doctorate of Philosophy in 1993.

Well known and respected for his love for poetry and as an eloquent speaker, Shri Vajpayee is known to be a voracious reader. He is fond of Indian music and dance.