In continuation of the series of programmes, BJP Anusuchit Jaati Morcha organized category-wise conference at party headquarters under the leadership of Morcha State President Surinder Bhagat. A large number of party activists and members of the SC community attended the conference. The day also coincided with the Nirvan Divas of Sant Kabirji. The leaders garlanded the portrait of Kabirji and lighted the traditional lamp as a mark of respect. Satsang on the life of Sant Kabir ji was also held in which Ramesh Lal, Puran Chand and Daya Ram spoke on the life and teachings of Sant Kabir. The programme concluded with the Preeti Bhoj.

BJP Senior leader & Incharge of Category-wise conferences, Chander Mohan Sharma, said that BJP is committed to raise the issues related to the upliftment of neglected and down-trodden class. He said that SC, ST classes are suffering because of Article-370 of Indian Constitution as this article has created hurdles in the free flow of benefits of Indian constitution. Many of the centrally sponsored welfare have not reached the needy and genuinely deserving poor people. He also criticized the state’s NC-Congress coalition government for working against the interests of a common man.

Surinder Bhagat, on this occasion, impressed upon the participants to go into the public in the localities housing the population of members of Schedule Caste community and educate them about the teachings of Sant Kabir ji. He said that Sant Kabir was a beacon of enlightenment and spiritual attainment from whom members of Anusuchit Jaati always felt inspired and drew strength. He taught all downtrodden and exploited people to always struggle and have faith and hope in themselves. He announced to celebrate the days related to all the saints and Gurus of different sub castes of SCs. 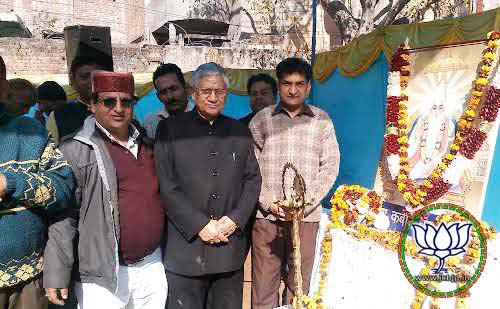 Ahead of BJP Prime Ministerial candidate Narendra Modi’s historical visit to Jammu on 1st December, BJYM activists will adopt all ways to make “Lalkaar Rally” a mega event, this was decided in a meeting undertaken by the BJP Secretary & BJYM Prabhari Yudhvir Sethi and BJYM State President Ravinder Raina. A special meeting of State […]